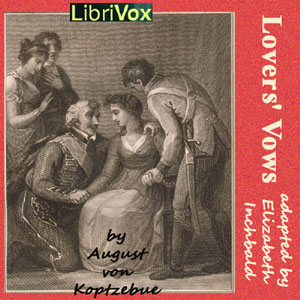 LibriVox recording of Lover's Vows, by August van Kotzebue and Elizabeth Inchbald. Lovers' Vows (1798), a play by Elizabeth Inchbald arguably best known now for having been featured in Jane Austen's novel Mansfield Park (1814), is one of at least four adaptations of August von Kotzebue's Das Kind der Liebe (1780; literally "Child of Love," or "Natural Son," as it is often translated), all of which were published between 1798 and 1800. Inchbald's version is the only one to have been performed. Dealing as it does with sex outside marriage and illegitimate birth, Inchbald in the Preface to the published version declares herself to have been highly sensitive to the task of adapting the original German text for "an English audience." Even so, she left the setting as Germany. The play was first performed at Covent Garden on Thursday, 11 October 1798, and was an immediate success: it ran for forty-two nights, "making it by some distance Covent Garden's most successful venture of that season," and went on to be performed in Bristol, Newcastle, Bath, and elsewhere. It was likewise successful as a print publication, though it also aroused controversy about its "levelling" politics and moral ambiguity. Anne Plumptre, who translated Kotzebue's play as The Natural Son, wrote (perhaps not disinterestedly as the production of Inchbald's work effectively precluded the production of her own) that Inchbald had transformed the character of Amelia into a "forward country hoyden." Others, however, defended the morality of the play. And indeed, various characters indulge in considerable moralizing about charity, honour, and forgiveness. (Summary by Wikipedia) Cast: Baron Wildenhaim, Countryman, and Prologue: Algy Pug Count Cassel: John Fricker Anhalt and Narrator: Alan Frederick: Peter Bishop Verdun the Butler and Epilogue: Ernst Pattynama Landlord: Martin Geeson Cottager: David Lawrence Farmer: Dale Burgess Gentleman: Ric F Servant and Cottager's Wife: Amy Gramour Agatha Firburg and Dramatis Personae: Sandra G Amelia Wildenhaim: Elizabeth Barr Country Girl and Preface: rigbyjm Narrator: Paul Andrews

Audio edited by: Algy Pug For further information, including links to online text, reader information, RSS feeds, CD cover or other formats (if available), please go to the LibriVox catalog page for this recording. For more free audio books or to become a volunteer reader, visit LibriVox.org. Download M4B (56MB)

Uploaded by librivoxbooks on October 12, 2011